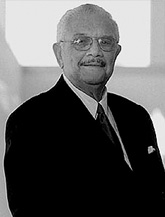 Vernon Jarrett began covering civil rights in the North during the 1940s for the Chicago Defender, one of the nation’s most powerful black newspapers. His career has spanned print, broadcasting and the classroom. In 1970, he became the first black syndicated columnist for the Chicago Tribune. During his 26-year tenure at the Tribune and Chicago Sun Times, Jarrett wrote more than 3,900 commentaries that helped shape the national discussion on race relations. Jarrett then moved to WLS-ABC TV where he produced nearly 1,600 television shows and commentaries. Additionally, Jarrett has served as an on-camera source for the PBS documentaries “Soldiers without Swords  A History of the Black Press in the 20th Century” and “The Promised Land.” Jarrett is a senior fellow at the Great Cities Institute of the University of Illinois at Chicago; a featured columnist for the Chicago Defender; a founder of the National Association of Black Journalists in 1975 and in 2004 the president-elect of its Chicago chapter.