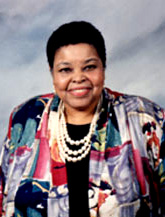 A graduate of Northwestern University’s Medill School of Journalism, Phyllis (Phyl) Garland began her career in 1959 as a reporter for The Pittsburgh Courier, a nationally distributed African-American newspaper. In May 1963, she went to Binghamton, N.Y., to interview the widow of William Moore, the white mailman who was shot to death while attempting a Freedom Walk to Jackson, Miss. The two articles she wrote were among the few to provide insights into Moore and the effect of his death. Later that year, she covered the March on Washington. While at the Courier,she also wrote a series on the history of blacks in the labor movement and numerous stories related to housing, education and the arts. After joining the staff of Ebony Magazine in 1965, she went to the Deep South to research Fannie Lou Hamer and other black women in the Civil Rights Movement. In 1968, she traveled through Mississippi, writing about the first blacks to elected to public office in that state since the Reconstruction. She also wrote the May 1968 Ebony cover story on the life and work of Dr. Martin Luther King, Jr., following his assassination. Currently, she is a professor at Columbia University’s Graduate School of Journalism, where she has taught for thirty years while continuing to write. She is a specialist in the field of black music.