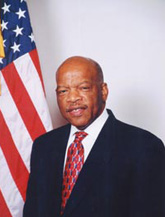 While still his 20s, John Lewis had already become one of the most effective leaders ofin the civil rights movement. The son of sharecropper, Lewis was born in Alabama, where he attended segregated public schools. After organizing sit-in demonstration in Nashville, Lewis volunteered for the 1961 Freedom Rides, which sought to challenge segregation at interstate bus terminals across the South. As a result of participating in these rides, Lewis was severely beaten by angry mobs. From 1963-66, Lewis was the Chairman of the Student Nonviolent Coordinating Committee (SNCC) and became a recognized as one of the “Big Six” leaders in the civil rights movement. In 1963, he was a keynote speaker at the historic “March on Washington.” In what would become a turning point for the civil rights movement, Lewis then only 25 years old and fellow activist Hosea Williams began a 54-mile march from Selma, Ala., to the capitol of Montgomery leading more than 500 demonstrators seeking the right to vote. At the Edmund Pettus Bridge, Lewis and the others faced Alabama State Troopers who tried to disperse the marchers with clubs, tear gas and horses. The day March 7, 1965 became known as “Bloody Sunday” and the press coverage of the violence so shocked the nation that Congress responded with the 1965 Voting Rights Act guaranteeing the right to vote to every American at the age of 21. The photos of Lewis, confronting the State Troopers and falling under their clubs, became one of the civil rights movement’s most powerful, symbolic images. In 1982, Lewis, a Democrat, began his political career on the Atlanta City Council He was elected to the U.S. House of Representatives in 1986. His congressional district encompasses the city of Atlanta, and parts of Fulton, DeKalb, Clayton and Cobb counties. On many anniversaries of “Bloody Sunday,” Lewis and other civil rights supporters including then-President Bill Clinton on one occasion repeat the historic walk across the Edmund Pettus Bridge in commemoration of the Selma voting rights marches.