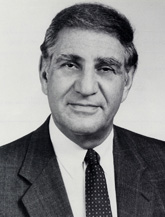 Herbert Kaplow, now a Washington correspondent for ABC News, has been a broadcast journalist since his graduation in 1951 from the Medill School of Journalism at Northwestern University. He spent many years with NBC News reporting on the civil rights movement from the Supreme Court’s ruling in the Brown case in 1954 to school desegregation dating back to the Little Rock confrontation in 1957, and including integration crises in other cities. Kaplow has covered almost every political convention for the last quarter of a century. In 1958, he traveled with then-Vice President Richard Nixon on his Latin American tour. During the 1960s, Kaplow covered Nixon again this time on the campaign trail for California governor’s seat, then for president. Kaplow has won numerous awards including a 1983 Unity Award for his involvement in the ABC Radio reports, “The Kennedy Years;” a 1983 Headliner and Unity Award for “The Dream Revisited,” an ABC Radio News special report marking the 20th anniversary of the March on Washington; and an Emmy for the ABC series “Directions.” A New York City native, he now lives in Falls Church, Va., with his wife Betty. They have three sons.