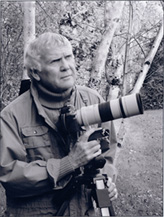 Charles Moore began taking pictures at age 14 in his hometown of Tuscumbia, Ala., the birthplace of Helen Keller. After high school and three years service in the Marines, Moore completed his formal photography training at the Brooks Institute of Photography in Santa Barbara, Calif. In April 1989, Moore received the first Kodak Crystal Eagle Award for Impact in Photojournalism for his world-famous photographs of the civil rights struggle taken from 1958-1965. His era-defining pictures of police dogs attacking demonstrators in Birmingham, Ala., in 1963 were used by Andy Warhol for his “Red Race Riots” silk screens. Moore also covered the 1962 riots at the University of Mississippi over the admission of the first black student, James Meredith. He also covered the Dominican Republic civil war, violence in Venezuela and Haiti, and the air war in Vietnam for LIFE, The Saturday Evening Post and Fortune. Moore’s book of civil rights photography, “Powerful Days,” was republished by the University of Alabama Press in 2002.