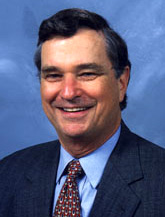 Hodding Carter III grew up with a family newspaper tradition of challenging intolerance and championing civil rights. His father, Hodding Carter Jr., was publisher and editor of the family-owned Delta Democrat-Times in Greenville, Miss., and won the Pulitzer Prize in 1946 for editorials calling for racial tolerance. Throughout the civil rights era, the Carter family and their newspaper faced burning crosses on their lawn, death threats and boycotts for their stand in favor civil rights and against Jim Crow segregation. Hodding Carter III graduated summa cum laude from Princeton University in June 1957. He spent two years in the Marine Corps and returned to Greenville in 1959 to follow in his fathers footsteps at the newspaper. For nearly 18 years, he was reporter-editorial writer, managing editor and editor and associate publisher of the Delta Democrat-Times. In 1961, he won the Sigma Delta Chi national award for editorial writing. He was a Nieman Fellow at Harvard in 1965-66. Expanding his civil rights advocacy beyond journalism and into politics, he helped organize a bi-racial delegation to the 1968 Democratic National Conventions to unseat the all-white segregationist Mississippi delegation. He worked on two presidential campaigns for Lyndon Johnson and Jimmy Carter. In January 1977, Hodding Carter III became the spokesman for the State Department and a familiar face to Americans watching his televised briefings during the Iranian hostage crisis. In 1980, he launched an award-winning career in television journalism, serving as host, anchor, panelist, correspondent and reporter for a variety of other public affairs television shows. He has written two books, “The Reagan Years” and “The South Strikes Back.” He held the Knight Chair in Public Affairs Journalism at the University of Maryland College of Journalism from 1995 to 1998. He has been president and CEO of the John S. and James L. Knight Foundation since 1998. He is married to Patt Derian, a veteran civil rights activist.