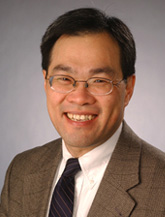 Shiu-Kai Chin is a professor in the Department of Electrical Engineering and Computer Science at Syracuse University and the Program Director of Computer Engineering. Chin is a commissioner on the Onondaga County/City of Syracuse Human Rights Commission. He is also a trainer in the Alternatives to Violence Project at Auburn Prison — a maximum-security prison in New York. The anti-violence project is an international, non-denominational program that teaches conflict resolution and communications skills. He is a narrator and player in the Syracuse Mental Health Players. The group uses improvisational role-playing as a means to educate audiences on topics ranging from adolescent sexuality, family and workplace communications to drug and alcohol abuse. He is also on the boards of several organizations including the Board of Trustees of WCNY Public Radio and Television and Community Wide Dialogue. In 1997, he was appointed Laura J. and L. Douglas Meredith Professor for Teaching Excellence —Syracuse University’s highest teaching award. Before joining Syracuse University in 1986, Chin was a senior engineer and program manager at General Electric.