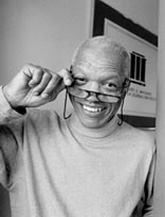 Earl Caldwell was the first black reporter to become a national correspondent for The New York Times and the only reporter with the Rev. Martin Luther King Jr. when King was assassinated. Caldwell was born in Clearfield, Penn. After graduating from the University of Buffalo, he covered sports for the Clearfield Progress and the Lancaster, Penn., Intelligencer Journal. Then he joined the Democrat and Chronicle in Rochester, N.Y., followed by a brief tenure at the New York Herald-Tribune. In the late 1960s, he began writing for the New York Times as a local and national reporter. He also covered civil rights riots across the nation in the summer of 1967 and the 1968 Democratic Convention. Caldwell’s refusal to provide information to J. Edgar Hoover’s FBI about the Black Panther Party placed him in the center of a landmark First Amendment case on reporters’ right to protect confidential sources. The Supreme Court’s 5-4 decision against him inspired many states to pass “shield laws” that continue to protect reporters today. In the 1970s, Caldwell wrote a column for the Washington Star. From 1979 to 1994, he worked at the New York Post. He was founding director of the Institute of Journalism Education, training minority reporters. In 1994, he published “Black American Witness: Reports from the Front.” In 1995, Caldwell won the National Association of Black Journalists’ prestigious President’s Award. He is the Scripps Howard Endowed Professor of Journalism at Hampton University.