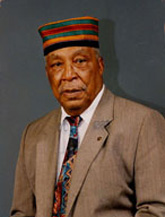 He has had a wide-ranging career, having served as a county constable, as an agent with the Tennessee State Alcoholic Beverage Commission and as one of the first black police officers in the City of Memphis. But it is as a photojournalist that he has earned a legendary reputation. In 1943, he entered the Army and convinced his commanding officer to send him to the Army photo school. Upon leaving the Army, he began making portraits, wedding photographs and parties then took photographic assignments from the Tri-State Defender, the Chicago Defender and other black newspapers across the nation. In the 1950s and 1960s, Withers covered many civil rights events in the South, including the Emmett Till murder case; the desegregation of Central High School in Little Rock, Ark.; school integration in Memphis and Clinton, Tenn.; the Montgomery, Ala., bus boycott and the Mack Charles Parker lynching. He was on the scene at the assassination of Dr. Martin Luther King Jr. Withers also covered the killings of three civil rights workers in Philadelphia, Miss. At the funeral of Medgar Evers in Jackson, Miss., he was beaten by a police officer and arrested. In 1988, Withers was inducted into the Black Press Hall of Fame.