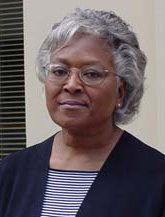 Walt Swanston is the Director of Diversity Management for National Public Radio (NPR) in Washington, DC. Her job is to shape diversity strategies in staff development and programming for the national nonprofit radio service.

Swanston has had more than two decades in print and broadcast journalism and more than 16 years in diversity-focused work with the media. She came to NPR from the Radio and Television News Directors Foundation (RTNDF), where she directed the organization’s diversity, educational and international programs for three years. Before coming to the RTNDF, Swanston served as the executive director of UNITY: Journalists of Color, and spearheaded the UNITY ’94 and UNITY ’99 conventions. She also has served as executive director of the National Association of Black Journalists (NABJ), directed diversity programs at the Newspaper Association of America Foundation and consulted for Knight-Ridder Inc. and other media companies.Swanston’s journalism career included posts as executive editor at WUSA-TV in Washington, D.C.; and reporter/producer for WETA-TV, the PBS station in Washington, D.C, during which she reported on Congress and the 1976 presidential campaign. She has written on assignment for The National Journal, National Observer, Washingtonian Magazine and The Washington Post. Early in her career she reported for The Washington Star, and San Francisco Examiner. She began covering the civil rights movement as a reporter for the San Francisco Sun-Reporter, a Black weekly newspaper in San Francisco and later for WETA-TV in Washington.