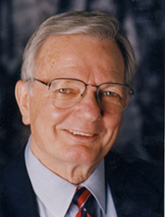 A former bureau chief of the Los Angeles Times, he has been a journalist for more than 50 years. He covered the past six presidents and every presidential campaign from 1968-1996. Since retiring in December 2001, he has taught as a visiting professor of the University of Southern California’s School of Journalism. In 2002, he was Shorenstein Fellow at Harvard University’s Kennedy School of Government where he wrote a research paper on government secrecy. And this year, he directed 20 Northwestern graduate journalism students in writing a series of 17 articles for the Medill News Service on gambling in the United States. Nelson began his career at 18 as a reporter with the Biloxi Daily Herald where his articles on illegal gambling sparked a U.S. Senate committee investigation. Later, he served 12 years at The Atlanta Constitution where his investigative reporting exposed state and local corruption and earned him several awards. He won a 1960 Pulitzer Prize for exposing conditions at Milledgeville State Hospital, then the world’s largest mental institution. From 1965-1970, as the Los Angeles Times’ Atlanta bureau chief, he covered the civil rights movement which led to two books: “Terror in the Night: The Klan’s Campaign Against the Jews,” and “The Orangeburg Massacre,” with co-author Jack Bass. Nelson served in The New York Times Washington bureau from 1970-2001. He was presented the Drew Pearson Award for Investigative Journalism, the Robert F. Kennedy Award for Lifetime Achievement in Journalism and was named a Fellow by the National Society of Journalists.