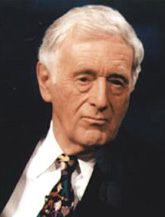 A former president of the American Society of Newspaper Editors, he served for 43 years as an award-winning journalist for The Tennessean, Nashville’s morning newspaper. At his retirement he was editor, publisher and CEO. In 1982, Seigenthaler became founding editorial director of USA TODAY and served in that position for a decade, retiring from both the Nashville and national newspapers in 1991. Seigenthaler left journalism briefly in the early 1960s to serve in the U.S. Justice Department under Attorney General Robert F. Kennedy. His civil rights work led to his service as chief negotiator with the governor of Alabama during the Freedom Rides. During that crisis, while attempting to aid Freedom Riders in Montgomery, Ala., he was attacked by a mob of Klansmen. Seigenthaler now hosts a weekly book-review program, “A Word On Words.” He is also a senior advisory trustee of the Freedom Forum. He chairs the annual “Profile in Courage Award” selection committee of the John F. Kennedy Library Foundation and co-chairs the Robert F. Kennedy Book Award for the RFK Memorial. Seigenthaler served on the 18-member National Commission on Federal Election Reform organized in 2001 by former Presidents Carter and Ford. He is a member of the Constitution Project on Liberty and Security, created after the Sept. 11 tragedies in New York and Washington. In 1991, Seigenthaler founded the First Amendment Center with the mission of creating national discussion, dialogue and debate about First Amendment rights and values.